Long time no see, very busy at the moment, but I’ve updated the file for the investigator deck boxes, it now includes all 21 investigators from the core set, Dunwich, Carcosa and Forgotten Age. And what’s even better, I’ve enlarged the thickness by 1cm, hopefully no more issues with bigger decks this way. No photo because I don’t have any time to actually build anything right now. 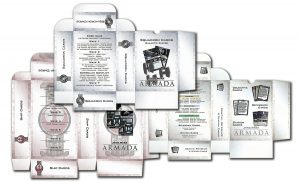 Some of the new tuckboxes.

Ok, this has been requested for quite some time, I finally managed to update the TuckboxCollection for Armada!

You’ll find size 1 to 3 boxes for everything (squads, ships and objectives/reference/stations) inside a new single file, hope that’s OK.

New MicroHangars and GearBoxes for wave 7 will be added, as well, I’m just waiting for my ships… 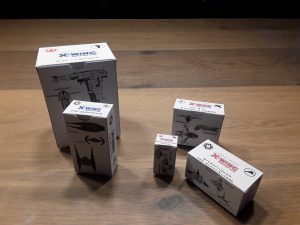 sorry it took me so long, but they are finally here: The new MicroHangars for wave 12 and 13!

Building is pretty much straight forward, putting the ships inside should be self explanatory, in case you are having trouble take a look at the picture to see the angled position of some of the ships. 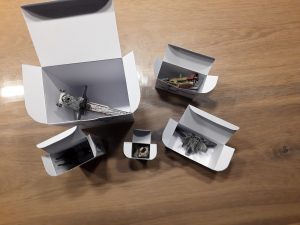 The GearBoxes are already nearly done, just have to build a new cover page, changed my workflow a bit to get rid of Adobe InDesign. Stay tuned, shouldn’t take too long!
EDIT: GearBoxes done, upload complete!

managed to get another one done, the MicroHangars and GearBoxes have been updated and now include the Guns for Hire expansion. As usual you can simply download the …ADD files if you’re only interested in the new boxes. No picture this time, but the boxes have the same measurements as the already available standard StarViper and Kihraxz MicroHangars.

happy new year to all of you, really, really sorry for the long radio silence, real life is annoying at the moment, I’m almost completely out of free time.

But nevertheless, to get back on track I’ve updated the MiniManeuverCards for X-Wing to v8.0, they now include wave 12 and 13 and a rebel version for the Scurrg.

More to come, still waiting for my wave 12 and 13 ships to arrive, so I can make more MicroHangars!

it’s been a while, I know, but I haven’t forgot about you. I hope it was worth waiting, as of now you can download a bunch of new stuff! 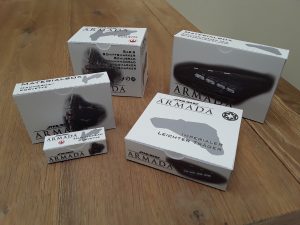 Two new MicroHangars for both wave 6 ships can be found in the download section. If you don’t like to build two tiny hangars for your Hammerheads, scroll down a bit to read about the ComboHangar alternative. The hangar for the Quasar Class has an optional docking clamp, that prevents the ship from rattling in the box. Omit it, if you don’t mind this. 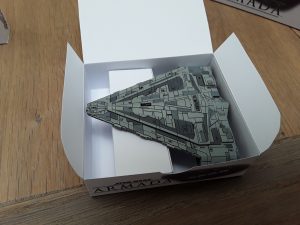 The two new GearBoxes are standard stuff, since each Hammerhead expansion comes with two ships, I’ve already placed two of them on the print sheet. Figured it makes sense. You don’t have to build the GearBoxes for the Hammerhead if you’re using the ComboHangar instead of the MicroHangar, see below. 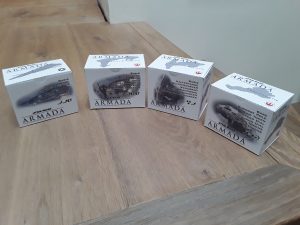 Promised long ago, I’ve finally added ComboHangars for all ships on poles (CR90, Nebulon-B, Imperial Raider and the new Hammerhead). So far only the two flotillas received such boxes, here’s the rest! The ComboHangars have more than enough room for all corresponding GearBox stuff, therefore you won’t need to build additional GearBoxes. There’s no separate download, you’ll find them within the MicroHangar files! Inside the ComboHangar (without GearBox stuff).

The ComboHangars aren’t exactly the same size, I’ve measured each of them individually to give the ships a good fit and not too much room to rattle around. You have to put the ship inside the ComboHangar at a slight angle, this is on purpose and prevents rattling, too.

If you haven’t noticed yet, there’s a new Localization section at the top, where you can find links to a growing collection of my master language files. If you like to have a localized version of my Armada stuff, I’ve added a link to the Armada excel there. Further infos to be found on the page and within the language file. Feel free to assist in translating some of my stuff. For now only the MicroHangars and GearBoxes are available for translation (preparing the files and the workflow is somewhat tedious).

That’s it, hope you like it, have fun, and remember that you can simply download the “… add” file to get only the new stuff,
SirWilli

Short notice for all french fans: As of now you can download the localized version of all(!) X-Wing GearBoxes and both new CollectorBoxes (Upgrade Cards and Pilot Cards).

Head over the X-Wing section to find them!

thanks to the help from five(!) different communities I’m able to update and expand the localized versions!

Inside the X-wing section you’ll find an additional Polish version of the MicroHangars, and all versions are now up to date (v11.5).
And furthermore the MiniManeuverCards are now available in English, German, French, Spanish, Italian, Brazilian and Polish, as well! And thanks to a dedicated Polish fan the Polish community might get the first localized GearBoxes in the not so distant future. Thanks to all of you!

Since this meant adding or updating about 60 files I’m almost sure I’ve messed something up, please be gentle and let me know, I’ll take care of it. And if you find any bugs inside your specific language version, feel free to inform me, as well!

And once again, if you like to have even more stuff translated, check out my localization page for further infos on how to help me with this. I’m going to add further projects to the language files hopefully soon.

sorry, no photos this time, printer has some issues. But nonetheless you can find a bunch new stuff on my page: New MicroHangars and GearBoxes (including some alternatives for the Scurrg) for both wave 11 and the M3-A from the Gozanti expansion.

Only english and german for now, rest will follow.

My dear IA fans, is has been far too long, I’m so sorry. But I’ve finally found some time, go check out the new CollectorBox for small cards in the Imperial Assault section. Hope you like it, and yes, a version for the large cards will follow, as well!