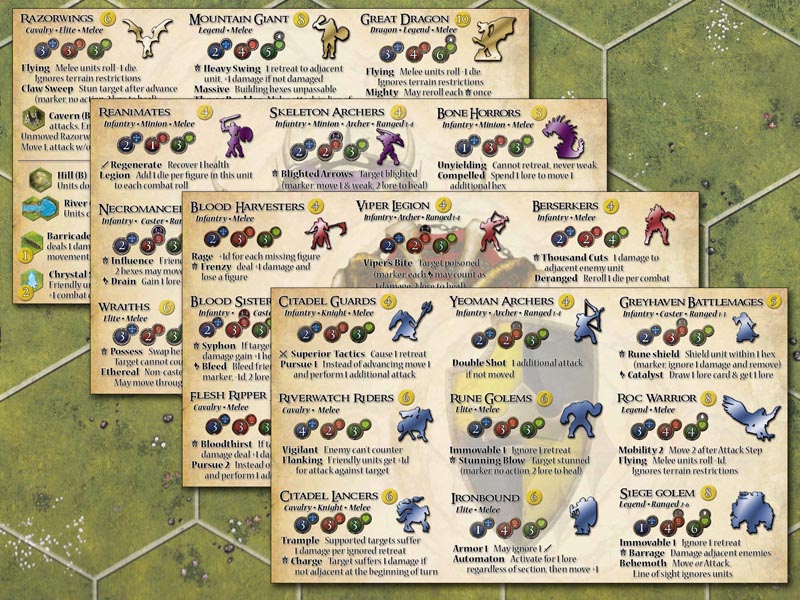 Basically they are slightly bigger cards that show a short(!) summary of all important unit and terrain infos and rules in one place. The font size is rather small because I wanted the sheets to fit inside my Command base CardHolder.

The sheets list all unit infos about stats, costs and special effects. Since this a short summary the description doesn’t replace the rule text, I tried to capture the essence of each ability but without knowledge of the rules you will quickly run into questions. Think of it as a memory aid.

Each faction gets its own sheet, the neutral units and the common terrains can be found on the general summary sheet. You’ll find costs (if any) and in-game properties of the different terrain types. Rules for the muster phase are omitted.

What sheets are there? 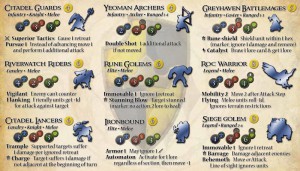 Lists all Daqan units from the core game and the “Hernfar Guardians” expansion.

Lists all Uthuk units from the core game and the “Warband of Scorn” expansion. 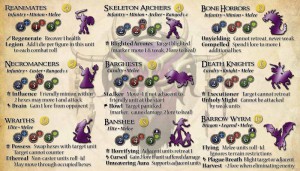 Lists all undead units from the “Terrors of the Mist” and the “Heralds of Dreadfall” expansions. 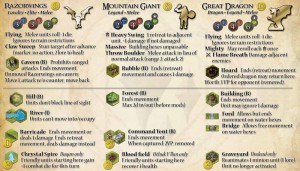 Lists the three neutral units and their hexes as well as all other terrain hexes known so far (picture sligthly outdated).

Why does the file have this many print sheets?

The file with the print sheets comes with two different variants:

As stated before the cards are measured to fit into the middle section of the Command base CardHolder (or into the rear slot). Of course you don’t have to do this.

That’s it, hope you like it, please bother me with problems and feedback!