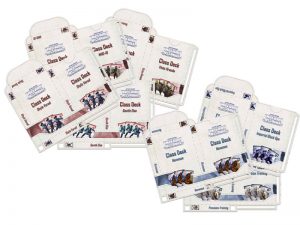 A pile of new boxes.

I have to apologize for the long wait, but I’ve finally managed to add further boxes for the Hero Class Cards and the Imperial Class Cards. I’ve added boxes for everything released so far, including the boxes from Jabba’s Realm (the german version comes without the imperial class cards boxes for now, have to wait for the official translation).

I’ve updated the file to v3.0, even though you’ll find mostly v2.2 inside it, besides the new file for the class cards. Hope that’s OK. I’ve added an additional PDF containing only the Class Cards boxes, just in case you don’t want to download everything else again.

If you look closely, the artwork on the box has changed slightly, mainly because there was a bug in my master file that caused the three cards on the front and back to be replaced by too small versions, along with an annoying subtle white border. Changed that, even for the old boxes. Hope you’re OK with this.